The best time to visit Zambia... 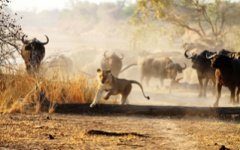 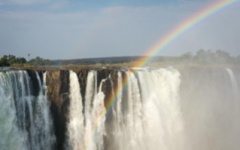 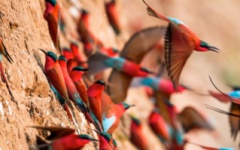 Although the temperature in Zambia stays relatively consistent and warm throughout the year, the best time to visit is in the dry season between July and October. This is, in the main, due to the famous 'black cotton' soil that renders many areas of the country impassable once wet. That being said, there are particular months and areas that go hand in hand, offering exceptional safari and game viewing experiences.

The best time to go to South Luangwa National Park is the period between middle of June and October when the park is at its driest and the days are warm with plenty of sun. The game viewing by vehicle and foot, is the most reliable during these months as the animals concentrate around the rivers for their primary water source. The drier the season, the easier it is to spot the wildlife as the vegetation and bushes are grazed down. The wet season outside these months make certain areas of the park extremely difficult, or impossible to access. This is because Luangwa’s infamous black cotton soil becomes extremely sticky and wet, making the roads simply impassable, even for safari 4x4’s! Some camps open during the ‘emerald’ season, which lights up the park with vibrant green tones and it is a particularly good time to visit for those interested in birdlife as the park is filled with a beautiful blend of endemic and migratory birds.

Similar to other areas in Zambia, the best time to visit the Lower Zambezi National Park is in the dry season between June to October. This is when the bush is thinner, the park is drier and the wildlife congregates around the river. During these months, all of the activities are offered including river cruises, canoe trips, fishing and night and day game drives.

The period outside of this window (November to March), is the rainy season. The weather during this time is very hot and humid and as the bush is greener and fresher, mosquitos’ numbers are much higher. The roads become bad and sometimes impassable so the scheduled flights into the park stop operating, and the majority of the camps close during this period. That said, this period, also referred to as the ‘emerald season’ has much fewer visitors and for camps that remain open, the rates are usually very low.

The best time to visit Kafue is the July to October window which is the height of the dry season. The game viewing is at its best, and most reliable during this time as the animals gather around the remaining water sources. The Busanga Plains, in the northwest area of the park are best visited in the dry season also, perhaps between the months of August and October. The Busanga Plains become completely inaccessible during the wet season.

The period between November to December is the wet season but this is the regarded the best season to travel as the animal’s migration to the plain during this time (the opposite to the wildlife pattern in most other parks). Many of the animals give birth during this time so there are plenty of newborns and the birding is exquisite. The plains are inaccessible between January and April and game drives are not permitted, so this is a time to avoid. The period from May to October is good as the plains begin to dry up and the conditions for wildlife are good. That said, October can be very hot!

The mighty Victoria Falls marks the boundary between Botswana (just), Zambia and Zimbabwe. This is the place where the waters of the Zambezi River cascade over 100 meters into the “boiling pot” below. A visit to the falls is really a fantastic adventure and something really worth making the effort to do. Again, as with many of the more famous sites in Africa, there is a strong argument to say that you should think of staying away from the busiest areas and benefit from the peace and tranquillity of being further upstream. There is no doubt that a visit to the mighty Victoria Falls at any time of the year will blow you away – the noise, the heat, the moisture, the splash and the overall unique display - but it is worth noting the difference in water volume throughout the months so that you can plan your visit based on the experience it offers.

December to March - The summer period and the height of the rainy season. The weather is hot and as the humidity builds up, thunderstorms often arrive in the afternoon. The Victoria Falls water levels are high and slowly increasing, so activities such as white-water rafting and visiting Livingstone Island Devil’s Pool are usually closed due to safety.

April to June - Many would say that the best time to visit the Falls is the period between April and June which is directly after the area’s summer rains. As a result, the falls have the greatest volume at this time so the amount of water flowing down is simply breath-taking! Visibility from some lookouts can be limited by the abundance of spray and mist so the local name ‘The Smoke That Thunders’ is definitely recognised during this time! Because of high water levels, it is worth noting that white water rafting and Livingstone Island/ Devil’s Pool are closed during these months. A visit to the falls during these months will guarantee to get you soaked… so a poncho or waterproof is a must!

July to August - The water levels of Victoria Falls are lower during these months and as such, the spray is not as intense which gives you greater visibility of the actual falls. At this time, Livingstone Island and the rafting season begins to open as soon as the water drops to a safe level. The only thing to bear in mind is that July and August are peak seasons at Victoria Falls (and Africa in general) due to the summer holidays across the UK and Europe, so be prepared for crowds and high visitor numbers.

September to November - This period is the end of the dry season when the falls water level is at the lowest. On the Zambian side, the falls may almost completely dry up so whilst the visibility is excellent, the experience will definitively be less intense and you certainly will not be wet! From an activity point of view, this period is a great time to visit as white-water rafting is at its peak and Livingstone Island and Devil’s Pool at the edge of the falls are open.

Where to go in Zambia:

South Luangwa National Park is located on Zambia’s eastern side and is considered the finest safari park in Zambia! The park is famed for its plentiful game, its variety of game viewing activities and most importantly, its exceptionally high quality of guiding and walking safaris that has raised...

The Lower Zambezi Valley is a huge rift in the earth’s crust that homes the mighty Zambezi River and two national parks either side (Mana Pools National Park sits on the Zimbabwean side and on the Zambian side, is the infamous Lower Zambezi National Park). With the exception of rhino, giraffe and...

First discovered by explorer David Livingstone in 1855, Victoria Falls, referred to locally as ‘the Smoke that Thunders’, is one of the world’s most impressive waterfalls. At a towering height of just over 100 metres, and a staggering volume of water cascading over the lip every minute (750 million...

Lusaka is the capital of Zambia and is by far, the largest city in the country. Although the city’s population is increasing, there is a sense of space in the city, and as far as African cities are concerned, Lusaka makes a pleasant overnight stay. The international airport makes it often the...

Located in the very west of Zambia is the most remote and secluded national park in the country - Liuwa Plains. Meaning ‘plains’ in the local Lozi language, the vast grassland is home to the second largest wildebeest migration on earth (after East Africa). An impressive 47,000 or so wildebeest...

Located in the centre of Zambia is Kafue National Park, and at a size of 22,400 square kilometres (approximately the same size as Wales), Kafue is the country’s largest national park. Although it is a lesser-visited area, Kafue homes a variety of areas and plains, offering diverse landscapes,...