Gorilla and Chimp Trekking in Uganda

A stunning country to see mountain gorillas and wonderful chimpanzees 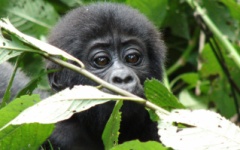 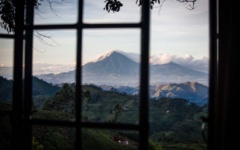 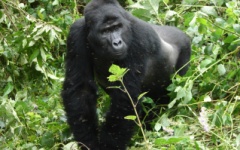 Uganda is probably the best country to visit if you are interested in primates. Chimpanzees are found in a couple of different forests in Uganda, and mountain gorillas are primarily found in Bwindi National Park.

There are two national parks that you can see the habituated gorillas. The main attraction is Bwindi National Park which is located in the very southwestern tip of Uganda. Bwindi homes approximately half of the mountain gorillas left in the world (Bwindi has around 400 gorillas).

There are 11 habituated groups of gorillas in Bwindi that you can trek to and see. These groups vary in size, family relationships and location. At the headquarters before the trek, the park rangers and guides will assign each group to a gorilla family in the park. The trek usually varies between 2-6 hours and this will all depend on which family you have been assigned (some are much closer to the park headquarters and others are much further into the forest). You will be able to have some say in it (especially if you are less/more fit than others), but the guides will be able to gauge the groups fitness and enthusiasm quite quickly.

One other place to see the habituated gorillas, although much less visited, is the Maghinga National Park. This park is south of Bwindi National Park and is Uganda’s smallest national park, at a size of 33.7km2. The park protects a variety of rare and distinctive flora and fauna, including mountain gorillas and golden monkeys on the Ugandan slopes of the Virunga Mountains. The park has one habituated group of gorillas which are trans-boundary.

‘Gahinga’ is the local word for piles of volcanoes stones cleared from farmland at the foot of the volcanoes. As well as the protection of the landscape and the endangered species, the park has a huge cultural significance. The Batwa Pygmies were the first tribe or hunter-gatherers in the forest. They were self-sufficient and you can go on a tour with a Batwa guide to learn the history and the secrets of the forest.

There is one habituated gorilla group that you can see in the Maghinga National Park who are, for obvious reasons, called the Maghinga Group. Because of its size and limited gorilla permits, Bwindi National Park is definitely more visited and popular with tourists, but if you are looking for something much quieter and unique, this is your place.

To see the gorillas in Uganda, you will need a park permit. Uganda sells 88 gorilla permits per day for Bwindi National Park for 11 gorilla groups, which works out to be a maximum of 8 people trekking to see one gorilla family at a time, accompanied by UWA (Uganda Wildlife Authority) guides. You must be over 15 years old to do a gorilla trek.

Uganda is, arguably, the best country in East Africa to see the chimpanzees, and alongside trekking to see the mountain gorillas, it is one of the most popular activities in Uganda! There are over 5,000 habituated chimpanzees in Uganda, which offers tourists a 1-hour visit to see the chimps, or an all-day chimpanzee habituation experience (called CHEX).

Chimpanzees are sociable animals and their groups can be comprised of anywhere between 10 and 100 members. They are very intelligent animals and have utilized traits and actions that have been passed on from generations, such as using rocks for crushing nuts and using empty pods for collecting water. Most of all, they are fun and playful, so trekking to see them is a really great experience. You can watch them interact, play and even squabble and fight between one another (this is much more interesting than watching a pride of lion sleep all day on safari)!

From a logistics point of view, the chimpanzee permits are $150 per person and includes park entrance on the day of the trek. The minimum age is 15 years old (the same for mountain gorillas), with the exception of Kalinzu Forest where the minimum age is 12 years old.

There are several destinations to see chimpanzees in Uganda including Kibale Forest, Budongo Forest and Kyambura Gorge. The best chimpanzee experience, by far, is Kibale Forest which is located in the south-western region of the country. This forest is home to approximately 1,500 chimpanzees and has, near enough, a 100 percent success rate of seeing them.

As well as chimpanzees in Kibale, there are 12 other primate species, including the black and white colobus monkeys, the red-tailed monkey and the grey cheeked mangabey, so definitely keep an eye out for these species’.

Another destination is Kalinzu Forest, located near Queen Elizabeth National Park. Here, there are around 290 chimpanzees and over 70 of these are habituated. As mentioned, the minimum age you can trek with the chimpanzees here is lower than the norm – it is 12 years old. The permit cost is also considerably cheaper as it is owned by a different management – the cost is $35 per person, compared to $150 per person in Kibale. That said, the downside to the Kalinzu Forest is that there is no good accommodation here so you would need to head back to Queen Elizabeth National Park to stay there, and more often than not, do the chimpanzee trekking as a day trip.

A final place you can see the chimpanzees is Budongo Forest, found in the Murhcison Falls National Park. The mahogany trees in the Budongo Forest provides perfect shelter for these intelligent chimpanzees, as well as other species of primates. There are approximately 100 habituated chimpanzees available here, and visitors can also opt for the whole day chimpanzee habituation experience (CHEX) in Budongo.

Chimpanzee trekking in Budongo offers a 7am morning session, and an afternoon session at 2pm. The best time to track chimpanzee in Budongo is between the months of May and August which are rainy seasons (which may sound contradicting to most safari destinations). This is because, during the dry season, the chimpanzees move deep into the forest looking for scarce food, water and shelter and this migration/movement reduces the chances of seeing them significantly because you have to trek a lot further to try and find them. The chimpanzee permits cost $85 in Budongo and because you are in the area for Murchison Falls, it is usually combined with a safari, and an experience at Murchison Falls.

When to go to Uganda:

In the southwestern corner of Uganda sits the most biologically diverse forests in Africa - Bwindi Impenetrable National Park. The forest is part of the Rift Valley Mountains that stretch over three countries – Uganda, Rwanda and the Democratic Republic of Congo – and the most famous reason to...

Uganda has several forests and national parks in which chimpanzees can be found and the park you visit will depend on the experience you are wanting – whether that is a chimpanzee tracking experience, or a chimpanzee habituation experience. Habituated chimpanzees mean that they are accustomed to...

Located in the northern region of Uganda, Murchison Falls is a waterfall found on the course of the great Nile. This is where the Nile squeezes through a narrow 8 metre gorge and cascades down to become a placid river and often a trademark rainbow.

Founded in 1952, the Queen Elizabeth National Park is located in western Uganda and is formed of a variety of ecosystems homes just under 100 mammal species and over 600 bird species. As a result, for obvious reasons, is often included in a Uganda itinerary. Vast savannahs, lush forests, glistening...

We currently have no content for this heading. Please view the other headings for more information.